When I gave birth to my first child, Evan, in August of 1994, my husband and I were elated. After nine long months of anticipation we were finally blessed with a beautiful baby. We joyfully watched Evan grow and develop normally for the next six months; he was such a happy baby, always smiling and laughing. We also had the normal hopes and dreams for Evan’s future.

Over the next few months we started to become concerned, as we realized that Evan was not developing at the same pace as other children his age. We witnessed our friends’ children begin to roll over, sit up, crawl, stand, walk, talk, and interact with each other. Evan was not able to do any of this; he just watched the other children, smiled and laughed at them.

Soon that began to change as his laughter disappeared and his observations became a distant stare. Evan was not even able to sit up by himself without falling over. We also started to notice that he was having difficulty eating. Jeff and I tried hard to fight the temptation to compare Evan to other children his age, but by 10 months it was apparent that there was a problem. 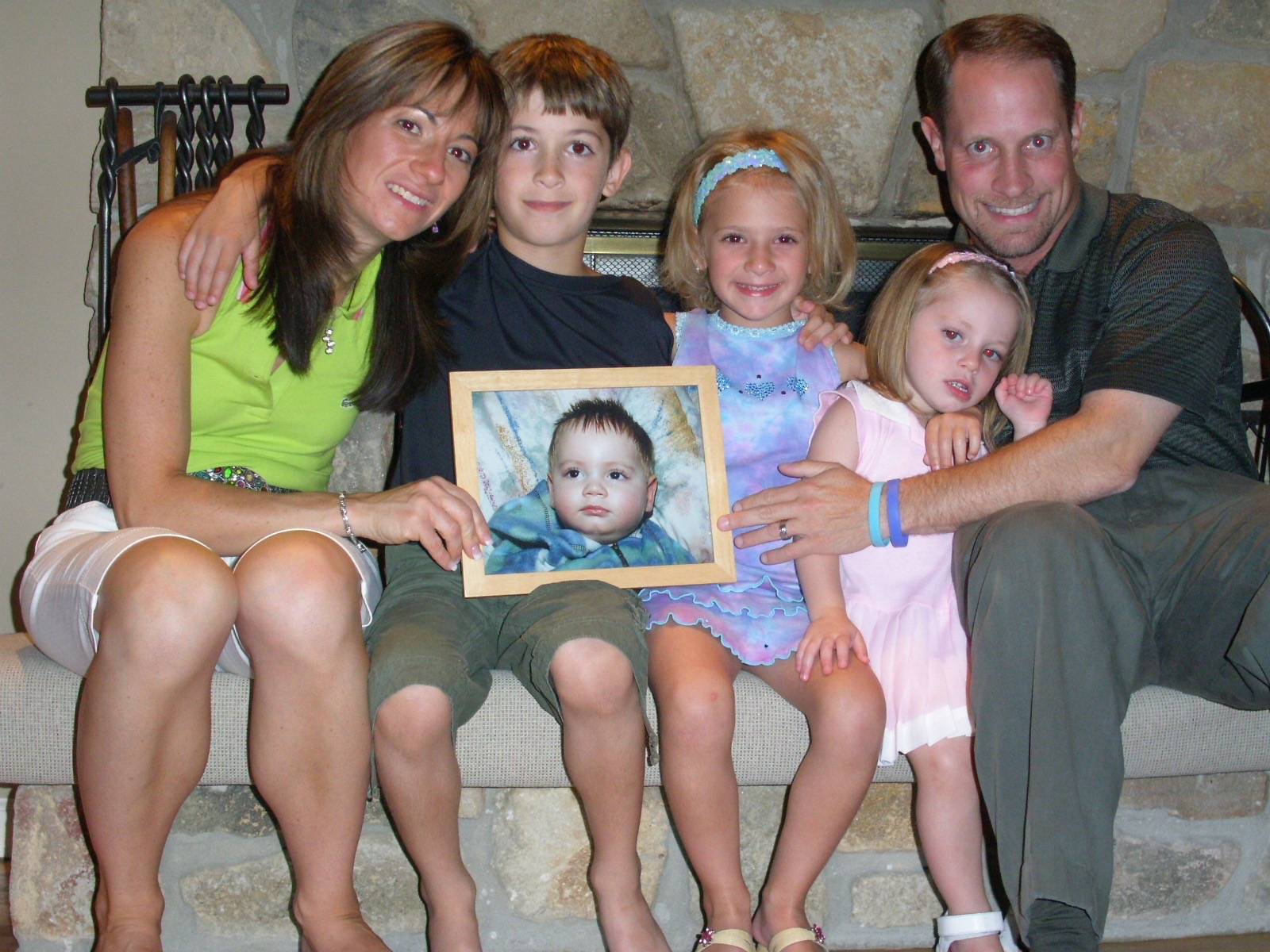 We took Evan to the pediatrician for a well visit and shared our concerns with her. She, too, was concerned with his lack of development, and recommended that we see a pediatric neurologist, which we did immediately.

The next three months were spent going from doctor to doctor and hospital to hospital where Evan underwent numerous, uncomfortable, and often painful tests. By this time, he was beginning to progressively worsen; we were trying to comprehend what could possibly be wrong with him.

At thirteen months we still had no diagnosis and he was continuing to lose whatever few milestones he had reached.

We went to see a pediatric ophthalmologist. Midway through the exam the doctor discovered a “cherry-red” spot on Evan’s retina. The doctor told us that this was an almost certain indicator that Evan had Tay-Sachs disease.

Hearing this news was beyond devastating; it was like having a dagger stabbed through my heart. After meeting with Evan’s neurologist and another round of tests, Evan’s diagnosis was confirmed.

Jeff and I quickly learned what a devastating disease Tay-Sachs was. We discovered that Evan would likely not live to reach his fifth birthday. We suddenly had to forget about the hopes and dreams we had of watching Evan grow up happy and healthy and now deal with the fact that we would lose him within a few years.

As Evan’s disease quickly progressed, he was unable to move on his own, he suffered multiple seizures daily, and had respiratory difficulty, which required us to provide chest physical therapy and to suction him regularly. He eventually became blind and deaf. We had a feeding tube surgically inserted so that Evan would be able to stay properly nourished and medicated. He had to undergo several hours a week of physical and occupational therapy so that his muscles would not atrophy.

Jeff and I wanted to care for Evan at home so that we could spend as much time with him as possible. We did not want to take a moment of his life for granted or waste any time we had with him. We wanted to create a lifetime of memories with Evan in the short time he had left.

We spent our days taking him to the park, pool, beach and zoo. He was constantly surrounded by people who loved him. Evan lost his battle with Tay-Sachs when he was almost 4 ½ years old. Although we knew that his disease was terminal, we were completely shocked when he died. There is no way to prepare yourself for the death of a child.

To honor Evan, I decided to turn our tragedy into something positive so that other families would be spared the suffering that we experienced. Having a child with a rare disease made me realize the importance of raising awareness about Tay-Sachs and the related genetic diseases.

Since Evan’s diagnosis, I have been involved with the National Tay-Sachs & Allied Diseases Association (NTSAD). I am the Immediate Past President of NTSAD. This organization has provided me with ways to channel my loss and sadness over Evan’s illness and passing by working towards education, research and family support services. I have spent the last 20 years working hard to raise money to help fund research in hopes of finding a cure or treatment for Tay-Sachs.

I have also become very involved in education of Jewish genetic diseases and the importance of pre-conception carrier screening. In addition to my work with NTSAD I am also the Project Coordinator for the Jewish Genetic Disease Consortium (JGDC) where I run programs throughout the country to educate physicians, clergy and the lay Jewish population about the need for pre-conception carrier screening.

If a couple knows their carrier status prior to pregnancy, they have ample time to seek genetic counseling, gain information about the disease(s) for which they carry, and make family planning decisions that will best suit them.

Jeff and I knew that we wanted to have more children. With each of my subsequent pregnancies I was able to have a CVS test performed. We now have three more beautiful and healthy children who fill our lives with joy and give us the strength to carry on.

Evan will always remain an important part of lives. Our other children have grown up helping Jeff and I honor Evan by getting involved in all fundraisers that we have run. Not a day goes by where I do not think about him or how our life would be if he were still alive.

Shari Ungerleider is the Project Coordinator for the Jewish Genetic Disease Consortium (JGDC). With her husband Jeff and father Stanley Michelman, Shari founded the Evan Lee Ungerleider Foundation when Evan, her first child, was diagnosed with Tay-Sachs disease in 1994. This Foundation is part of the National Tay-Sachs & Allied Diseases Association (NTSAD) where Shari been a board member for over 20 years.

Next Article: Michelle’s Story >
< Previous Article: 13 Selfies You Took (Or Will Take) on Your Birthright Trip