Earlier last month, Lifetime TV unveiled a new series, which brings the African-American and Jewish-American communities together in holy matrimony… literally. In this new docu-sitcom, “Kosher Soul” (#KosherSoul), Jewish Los Angeles stylist Miriam Sternoff and African-American comedian O’Neal McKnight find love and seek to navigate the world of interfaith and interracial marriage. In an effort to please Sternoff and her Jewish family, O’Neal moves forward with a Jewish conversion throughout the season. 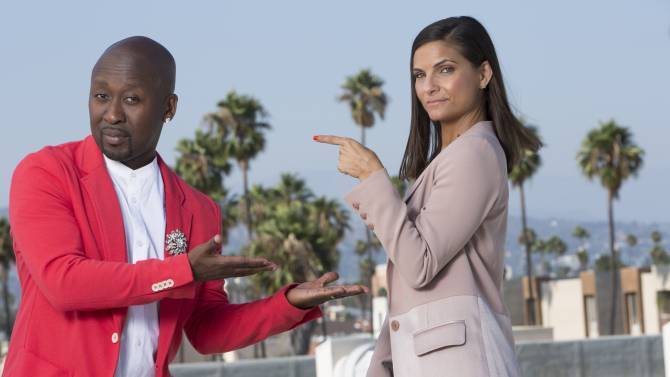 While Miriam values Jewish traditions and wants to indulge in family Sabbath dinners in a Jewish home, she must find a way to integrate her husband’s soulful southern upbringing. Tensions run high pitting O’Neal against Sternoff’s Jewish family, who question his level of commitment to Miriam and his Jewish conversion. As the couple’s unique lifestyles clash throughout the series, stereotypes, which teter into offensive territory, span across food, circumcision, dental grills, and everything in between.

Twitter already exposes mixed reviews on the show’s concept, which leaves the longevity of Kosher Soul treading dangerous waters. One twitter user, Michael Twitty, already laid claim to the username @KosherSoul, where he disseminates recipes and culinary advice to fuse Jewish and African-American cuisine. Twitty, 37, underwent Orthodox conversion following decades of positive experiences with the Jewish community, though he still tightly holds onto his roots.

In an interview with “Jewish Link New Jersey”, Michael Twitty compares the triumphs of the Jewish and African-American people to explain, “We use our food to empower ourselves. What I do with kosher soul food is combine the survival gene in the Jews with the survival gene in black folk, and I make it work.” Check out Michael Twitty’s full response to Lifetime’s new show here.

Additionally, The Alliance of Black Jews, a group of individuals of African descent who celebrate Halachic Judaism, addressed Lifetime on their exploitation of “offensive stereotypes,” while several other black Jews tweeted in protest using #ourkoshersoul. Though Twitty and others have already tweeted their frustrations with the show’s premise, social media proves that there is in fact a curiosity about the blending of these two cultures.

Holistically, the existence of this show demonstrates an acceptance of merging various cultures and ethnic groups to form new mixed families. In the twenty-first century, intercultural marriage rates are on the rise in the U.S. and according to the 2010 Pew Center report, 1 in 12 couples married in the U.S. were interracial couples.

While many young Jewish individuals may find love outside of the Jewish community, it is a common misconception that these non-Jewish spouses are not at risk to be carriers for the 19 genetic diseases found most commonly in the Ashkenazi Jewish population. Though the Jewish population may be more susceptible to this specific range of genetic diseases, we encourage couples with no Jewish ancestry, or both Jewish and non-Jewish ancestry to take advantage of genetic screening prior to pregnancy.

Though the show may be wildly offensive for some, the affection between Miriam and O’Neal appears sincere. As future episodes will explore the beginning stages of family planning, we hope that Miriam and O’Neal set an example by getting screened responsibly prior to conception. If you and your partner dream of healthy children joining you around your Sabbath table, take action today to ensure the optimal health of your family.

Think this show will last long enough for Miriam’s mother to meet her Jewish grandchildren, or will the plug be pulled mid season? Let us know your thoughts!