The Power of Planning Ahead

“You’re perfect for each other! You really should get married!” You might think that our best friends said this to us, or maybe even our parents. They did too, but this time, it was our fertility doctor. He wasn’t complimenting my husband Ryan and I on our symbiotic relationship or the courtesies we showed to each other. He was talking about the fact that we were genetic carriers for the identical mutation for Gaucher disease.

Gaucher is a disease commonly carried by Ashkenazi Jews. It is variable from person to person, with some people living their entire life not knowing they have it, to others with severe symptoms that can be life threatening. The chances of us having an identical mutation were beyond numbers and the only reason we knew that we carried this mutation was because of genetic carrier screening. 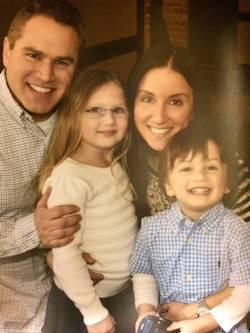 We learned that in vitro fertilization (IVF) with preimplantation genetic diagnosis (PGD) was one option that would help us get around this risk and maximize our chances of conceiving a child that did not have Gaucher disease. There was some grief involved in knowing that the road would be long, arduous, painful, and quite public (not to my congregants, as we chose to not to tell anyone but family, but we would need three labs, multiple doctors, countless nurses, and the FedEx guy). Needless to say our heads were spinning.

Our doctor explained that through IVF, embryos could be created, and those that made it to eight cells would have one cell extracted. That cell would be sent to a genetics lab that, after making a special probe created specifically for us to detect our unique mutation, would determine if the embryo the cell belonged to had Gaucher, was a carrier of Gaucher, or was free of both the disease and being a carrier of the gene.

For Ryan and I, there was no question about whether or not this was the right path for us to take to enlarge our family of two. We were going to do anything medically possible to ensure that our children were born free of a potentially devastating disease. And so we began.

There was a lot of blood-work. And waiting. And money. Lots of waiting for the probe to be created. Lots of check-writing to all the labs and offices that were helping us build our happy and (please G-d) healthy family. But the time didn’t matter, nor did the expense, because in this one situation, we were actually hoping to buy health — at least when it came to Gaucher. When we got the news that everything was in place, and we were ready to go, we were exhausted and overjoyed.

In the end, we did IVF with PGD twice. In the first pregnancy, two embryos gave us our sweet daughter Bayla. In her IVF round, two embryos were implanted; one was a carrier of Gaucher, and one was free of the disease. We don’t know which resulted in our Bayla, but someday, we will have her tested and we will know if she is a healthy carrier or totally free of the gene.

Our second round resulted in our beautiful twins, Asher and Sage z”l. Again, the same situation occurred; one was a carrier and one was free of the disease, and again, we don’t know which was which. Our daughter Sage passed away shortly after birth from an unrelated medical problem.

If you asked Ryan and I if we would try genetic screening and IVF with PGD again, we would both say yes without hesitation. We believe if the medical science was available, there was no reason not to do everything we could to ensure the health and well-being of our babies. We saw it as our first act of responsible parenting. There’s nothing we wouldn’t do for our children, and for us — I guess that began before they were even conceived.

For six years we have kept our story a secret from all but a few close friends. Now, we hope that it will encourage clergy to counsel their couples to pursue genetic testing. We are proof that happy, beautiful families can be created in the most unexpected and even scientific ways. It can be done, and our children are literally living proof. If sharing our story helps other families, then it will have been a success for us and hopefully, many others as well. Then, even more miracles will be created!

Rabbi Jennifer Kaluzny is a rabbi at Temple Israel of west Bloomfield, Michigan and also the Jewish Hospice and Chaplaincy Network. She has been married to Ryan for 8 years. They are blessed with her children, Bayla 5, Asher 3, and Sage z”l.